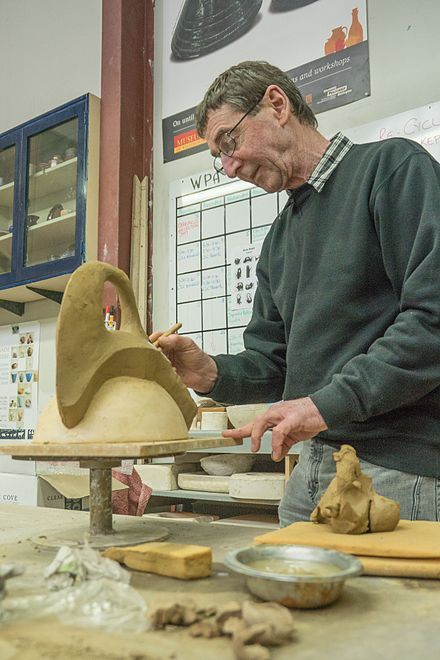 Rick Rudd was born in great Yarmouth, England and trained at Great Yarmouth and Wolverhampton Colleges of Art, attaining a Diploma of Art and Design in 1972.

In 1973 he arrived in New Zealand and since then has one several awards including the Fletcher Brownbuilt Pottery Award (1978, the Winstones Bowl Award (18981), the New Zealand Academy of Fine Art, Caltex Oil Award (1983), Norsewear Art Award for Pottery (1995), and Ballantynes Contemporary Tableware Award (2001).

He has exhibited widely throughout New Zealand, regularly in solo exhibitions, numerous times as guest exhibitor and his work has been included in international exhibitions in Italy, Austria, Canada, USA, Singapore, Japan, Finland, Hong Kong, Guernsey and Taiwan.

His work is held in many of the museum and art gallery collections in New Zealand, including the Museum of New Zealand, Te Papa Tongerewa. It is represented in several books including Craft New Zealand, Studio Ceramics, Ceramic Form, Contemporary Ceramic Art in Australia and New Zealand, 100 New Zealand Craft Artists, 500 Teapots, 500 Bowls, The Best of 500 Ceramics and often in The New Zealand Potter magazine.

He has curated and selected national exhibitions and has conducted workshops for many potters groups and polytechnics around New Zealand. He was president of the New Zealand Society of Potters (1988 - 1991_ and was made life member in 2006. He was a participant in the first New Zealand Ceramics Symposium (1988) and received Queen Elizabeth II Arts Council grants in 1984 and 1992.

DAVID OWEN
David is a Raumati based artist and illustrator. His paintings reflect his love of the New Zealand landscape and buildings, both real and imagined. He has exhibited extensively, most recently with the Kapiti Arts Trail and the NZ Academy of Fine Arts. He has completed many commissions for clients in NZ, Australia and the US.
JANE McCULLA
Experiencing rural or remote landscapes and seascapes, I am fascinated by momentary glimpses, indexical traces, entropy processes and archaeological references, communicating man’s presence and time. The latter and the cycles, rhythms and routines of life lead me to manipulate clay, earth’s primary material, to relate a personal dialogue with my environment.

Darryl Frost
Darryl's work is a tactile and intuitive response to nature taken from his surrounding. His keen observations run wild and combine with the individual idiosyncrasies of the source of clay he uses.
These are the sources of inherent creation, the elements in between the maker and the kiln, where the unexpected leads the way to the imperfect.
When Darryl's pieces are unveiled from the kiln the true beauty is revealed, altered and twisted,; a sculpture in itself, the raw materials shaped by man and fire.

Liane Ashman
Liane has qualifications in Graphic Design, Fine Arts and Art History.
She was finalist in the Park Lane Art Awards 2006 and winner (1st equal) in 2007.

About Me
"Creator, Maker, Designer, Artist.
I have been creating since I was a child.
My adult life has been a blend of Graphic Design, Set Design, Sculpting and Painting.
In 2000 after many years as a Graphic and Set Designer, i took a three year sabbatical to retrain as a painter and study art history. This became a 10 year journey of oil painting and exhibiting. I was represented by several art galleries around New Zealand.
In 2013 I was looking for a smaller more intimate voice for my creative outlet when I came across Air Dry Clay. I haven't looked back. It is a medium that is very challenging to use, but one that I find very rewarding. It enables me to create intimate characters that reflect my sensitivities, quiet strengths and idiosyncrasies.
These characters are my story - our story. They are a bit scuffed, a little weathered, certainly humbled by what has gone before. But they are quietly confident and always find a positive way to battle on. I hope you enjoy them as much as I enjoy creating them".